our service for you

You already own a machine from us - we check the planned conversion with you and implement it.

Configuration of our machines

You like a machine from us - but one or the other point does not fit ?

We will be happy to advise you and find a solution.

Your idea? We made it happen.

You need a machine that is not yet available for your application ?

We develop your machine with your ideas. 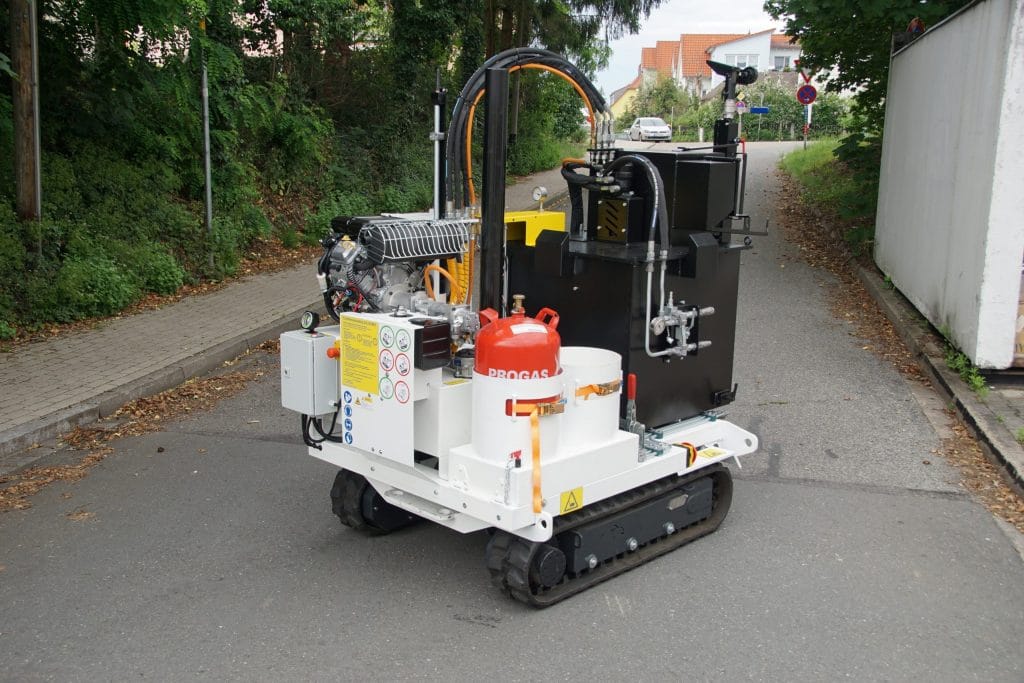 Safe and clean solution. Grouting the joints on large slopes.

End of the manual work with joint casting in landfill construction: Richard Rupprecht GmbH from Neunkirchen am Sand in Bavaria developed a special device for a customer.

When sealing landfills, the connecting flanks of the asphalt layers that are paved with a paver must be sealed or sealed with hot casting compound before the next layer is laid. All this up to an incline of about 30 °.

A stationary cooker is usually used for this, from which the worker fills the hot material into a bucket or potting can and uses it to manually seal the seams.

This procedure has some major disadvantages: in addition to the dangerous working environment, which clearly shows a gradient of up to 30 °, and the manual processing of a mass of up to 180 ° C, this is neither effective nor the quality satisfactory. Because, on the one hand, only a few meters can be potted before the bucket / potting can be refilled. On the other hand, the result is often unsatisfactory because the mass is distributed without a slide and not evenly.

The aim was to develop a machine that could be leveled in the entire working environment and operated on an incline of up to 30 °. The solution was a potting machine on a crawler track, which has a radio remote control and is equipped with a hot potting cooker.

The machine operating under the name HLK-120 RW-R was designed in such a way that the 120 l hot-pouring cooker can be rotated into 3 positions. This means that the outlet can be directed either to the right, left or to the front. The grouting takes place via a rotatable grouting unit, which rests on the asphalt surface and always adapts to the ground via a height-adjustable support wheel.

The whole frame was built on a very massive and powerful crawler chassis. When driving the HLK-120 RW-R, the entire structure is always leveled horizontally. This is done either automatically or manually by means of the radio remote control via a very finely reacting spindle drive.

It is possible to operate each drive chain individually or both together. Two driving speeds are also provided.

A potting pump unit is available as an option, which gives the customer the option of applying the hot potting compound via a potting hose.

Incidentally, even without the chassis, the HLK-120 RW-R with its 120 l cooker is the smallest joint sealing unit with a sealing pump that is available on the market.

A system trailer adapted to your individual needs.

We are happy to assist you in choosing the right products.

Warning: Trying to access array offset on value of type null in /homepages/25/d28563993/htdocs/RRGMBH/wp-content/plugins/elementor-pro/modules/nav-menu/widgets/nav-menu.php on line 1446

Warning: Trying to access array offset on value of type null in /homepages/25/d28563993/htdocs/RRGMBH/wp-content/plugins/elementor-pro/modules/nav-menu/widgets/nav-menu.php on line 1459

Warning: Trying to access array offset on value of type null in /homepages/25/d28563993/htdocs/RRGMBH/wp-content/plugins/elementor-pro/modules/nav-menu/widgets/nav-menu.php on line 1470

Warning: Trying to access array offset on value of type null in /homepages/25/d28563993/htdocs/RRGMBH/wp-content/plugins/elementor-pro/modules/nav-menu/widgets/nav-menu.php on line 1483
Menu

Richard Rupprecht GmbH has specialized in the development and construction of road maintenance machines for more than 35 years. Through the complete "in-house" production (design/development - production & assembly - sales) it is possible for us to: To develop machines for you according to your needs.
Learn more